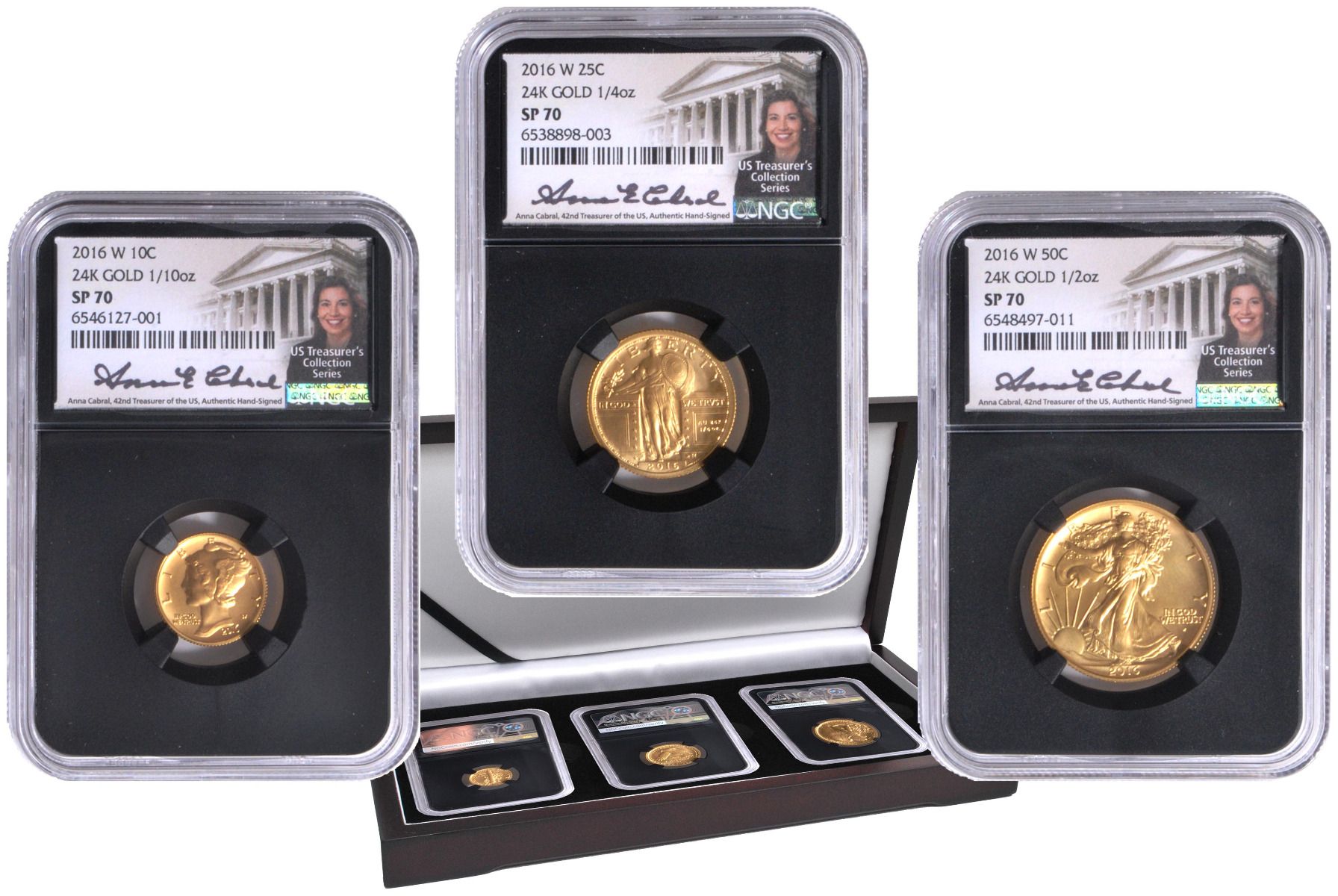 This magnificent set contains three of the most beloved coins of the 20th century, the Winged Liberty Head (or “Mercury”) Dime, Standing Liberty Quarter, and Walking Liberty Half Dollar. Each of these classic designs is struck off of its traditional metal and minted for the first and only time in pure 24kt gold. This centennial set is the forerunner of the Morgan and Peace dollar centennial sets released in 2021.

Collectors of modern issue coins will instantly recognize the Walking Liberty Half Dollar design because it was pulled from a 39-year retirement and used on the obverse of the American Silver Eagle 1986-2021.

The “V” as “In God We Trvst” on the Standing Liberty Half Dollar is not an error it’s the V for victory, which can also be seen on the Peace dollar 1921-1935.

The Dime shows an allegorical image of Liberty wearing a winged cap. Liberty’s resemblance in this design to the Roman god, Mercury, led to the issue being nicknamed the “Mercury dime.” All three coins were struck at the West Point Mint with a specimen burnished finish, there are no proof versions.

Each coin is individually hand-signed by Anna Escobedo Cabral, 42nd Treasurer of the United States. The Cabral signature is one of the best known and most sought after signatures in all of the numismatics having also appeared on the $100 bills series 2003A, 2004A, 2006, and 2006A.

celebrates the 100th Anniversary of some of the United States Mints greatest coin designs, the Mercury Dime, Standing Liberty Quarter, and Walking Liberty Half Dollar.
Each coin is a one-time-only release
Minted for the first and only time in pure 24kt gold
Each coin features an allegorical representation of Liberty, the last design of each denomination to do so.
The U.S. Mint reported a sellout within an hour of the launch on April 21, 2016
West point Mint issue – Each coin has a W mintmark
Specimen strike – coins certified in SP70 by NGC
Three unique signatures by Anna Escobedo Cabral
Low NGC certified population
Coins are presented in black core UST labels.
An ideal companion set to the 2021 Morgan/Peace doll