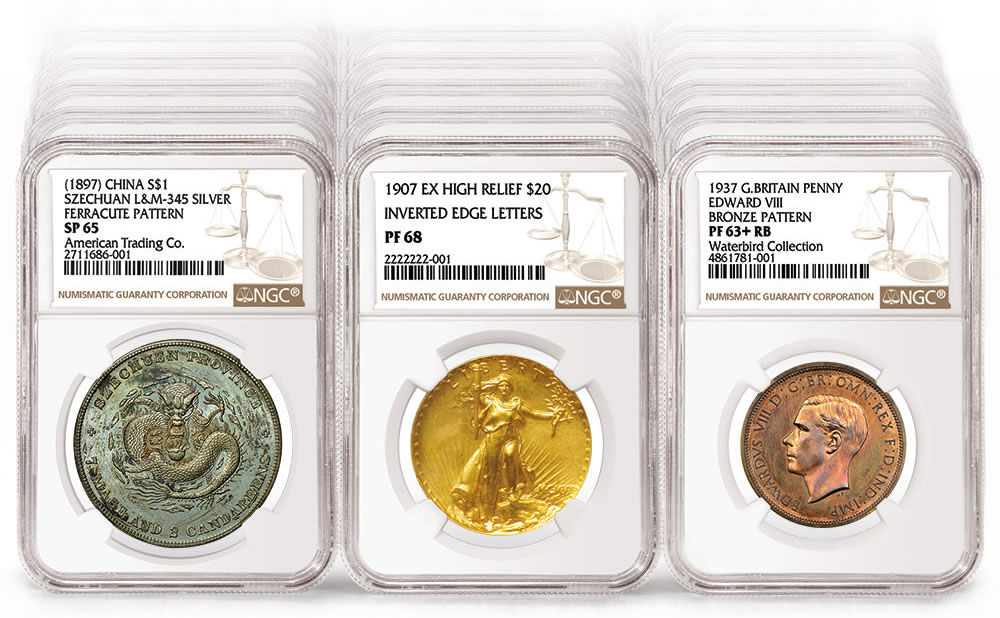 NGC has led the industry for many years. In 2010, it became the first third-party grading service to reach 20 million coins graded. By 2018, that number had doubled to 40 million coins — another milestone reached first by NGC. Stellar growth across many categories and worldwide locations propelled NGC to 45 million coins graded. A truly global grading service, NGC certifies ancient, vintage and modern coins as well as tokens and medals. The company now has offices in Sarasota, Shanghai, Hong Kong, Munich and London; 19 Official Submission Centers; and thousands of Authorized Dealers around the world. With full-time grading in Sarasota and Shanghai and regular on-site grading events in Hong Kong and Munich, NGC delivers faster turnaround times for submissions along with more personal and localized services. While NGC’s services and scope have expanded significantly since its founding in 1987, the company maintains an uncompromising commitment to its founding principles of accuracy, consistency and integrity. NGC employs a team of more than 30 full-time graders, many of whom have decades of grading experience. To ensure impartiality, NGC and its full-time graders do not buy and sell coins commercially, and strict procedures are in place to prevent consultants from influencing the grades assigned to their own submissions. After grading, coins are encapsulated in NGC’s state-of-the-art holder, the same holder used by the Smithsonian Institution to preserve some of its most important numismatic rarities. In addition, every coin that NGC certifies is backed by the comprehensive NGC Guarantee — the strongest in the industry. "NGC’s continued success is rooted in a steadfast commitment to our guiding principles of accuracy, consistency and integrity," says Mark Salzberg, NGC Chairman and Grading Finalizer. "We thank all of the collectors and dealers worldwide who trust us to grade their cherished coins." Among the 45 million coins that NGC has graded are some of the world’s greatest and most famous rarities, for example: NGC graded Neil Armstrong’s Apollo 11 Gold Medal (NGC MS 67), which realized more than $2 million at an auction in 2019. NGC graded an 1897 Szechuan Ferracute Pattern Set with coins ranging from NGC SP 63 to NGC SP 66, which realized more than $1 million at an auction in 2019. NGC graded one of the first 10 Morgan silver dollars (NGC SP 64) struck by the San Francisco Mint in 2019. NGC graded the Cherrywood Collection of 26 rare vintage Chinese coins, which realized more than $1.3 million at an auction in 2019. An extremely rare 1787 Brasher Doubloon was graded NGC MS 63 and sold for more than $5 million in a 2018 private sale. NGC graded a 1792 Washington President Pattern Gold Eagle (NGC XF Details) from the Eric P. Newman collection that realized more than $1.7 million at auction in 2018. NGC graded a quartet of massive China gold pieces in 2018, together containing over $1.5 million in gold. NGC graded three of the four known Confederate Half Dollars, including the Eric P. Newman specimen (NGC PF 40), which sold for nearly $1 million in 2017. NGC graded a Chinese 1992 Compass 1 Kilogram Gold 2000 Yuan (NGC PF 69 Ultra Cameo), which realized more than $1.2 million at an auction in 2011. NGC has graded three of the five 1913 Liberty Head Nickels, including an NGC PF 64 specimen that realized more than $3.7 million at an auction in 2010. NGC graded seven 1804 Dollars, including an NGC PF 62 example that sold for nearly $3.8 million in 2008. Learn more about NGC and its services and benefits at NGCcoin.com (global site), NGCcoin.cn (China), NGCcoin.hk (Hong Kong), NGCcoin.de (Europe), NGCcoin.uk (United Kingdom) and NGCcoin.in (India).
December 12, 2019 | View: 200 |  By: Admin