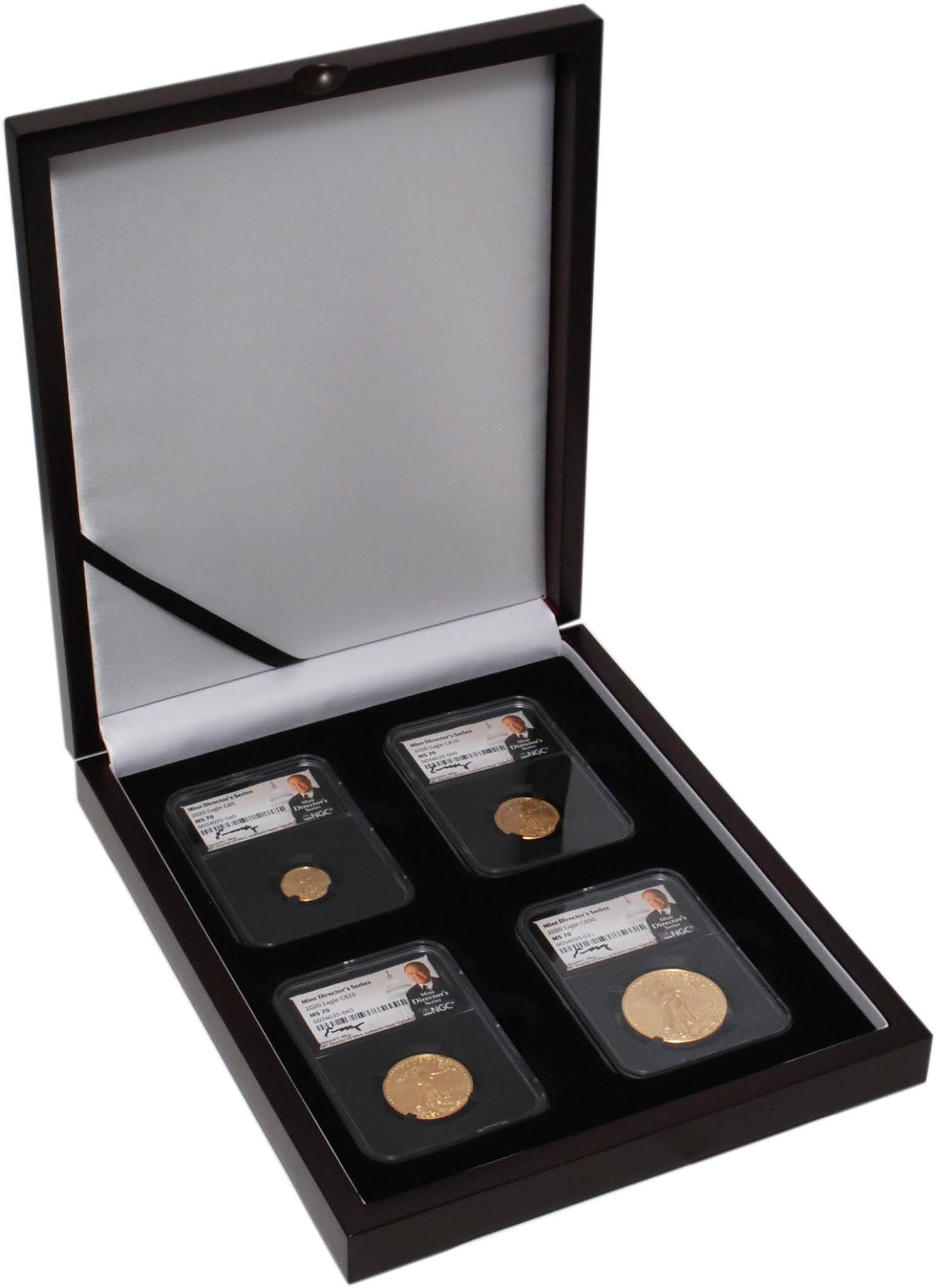 2020 is the final year American Gold Eagle coins will be issued with the beloved “Family of Eagles” design nesting on the reverse of the coins. The design by Miley Busiek, has appeared on every coin since 1986. The design change makes the 2020 releases key dates in the series. This is an ideal time to buy the complete four coin type set comprising of the popular one-ounce $50 Gold Eagle and the three lower mintage fractional coins that have a face value of $25, $10 & $5. Combined the sets contain 1.85 troy ounces of 22 karat gold. We showcase the complete four-coin type set in perfect MS70 condition. Coins are graded on a 70-point scale with 70 being absolute perfection. These sets have been certified by NGC, the largest coin grading service in the world. For collectors seeking a further level of exclusivity, each coin is these sets has been signed by Edmund C. Moy, the 38th Director of the United States Mint. The Moy signature is coveted by collectors and is a standout in the ever growing Signature Series coin market. The presentation of these sets is further enhanced by use of the Mint Director Series labels and black core holders. Edmund C. Moy Edmund C. Moy served from 2006 to 2011 as Mint Director, Prior to his appointment as Director of the US Mint, Moy was a member of the White House staff and worked as a Special Assistant to President George W Bush, he was tasked with recommending candidates to serve in the Cabinet department and independent agencies. Moy was at the White House during the September 11 attacks and was subsequently privileged to be a part of the efforts to form the US Department of Homeland Security. In Moy’s first year as Director, the US Mint struck 16.2 billion coins for circulation and sold $1.04 billion in numismatic collectibles. As one of the few profitable US government agencies, the US Mint transferred $750 million to the General Fund of the US Treasury that year. Moy led the US Mint at a time when it launched many exciting new coins for collectors. His term started just as the Mint was releasing the hugely popular 20th Anniversary Silver and Gold Eagles. During his tenure, the US Mint would experiment with other new coins and series aimed at increasing interest in modern coin collecting, including Reverse Proof finishes, the 2009 Ultra High Relief $20 and other interesting issues. Moy also oversaw the launch of the Presidential Dollar program in 2007 and the America the Beautiful Quarters program in 2009 as well as completion of the monumental 50 State Quarters program.
September 8, 2020 | View: 95 |  By: Admin