American Silver Eagles were first authorized under the Gold Bullion Act of 1985 and signed into Law by President Ronald Reagan as a mint store of wealth. The design is considered to be one of the beautiful of all time, a major contributing factor to the popularity of the coins with both coin collectors and silver bullion buyers. American Silver Eagles are the largest and purest silver dollars struck for circulation. Their diameter 40.6 mm is larger than the classic Morgan Silver Dollars, 38.1 mm. American Silver Eagles are minted in one troy ounce of .999 pure silver, higher than the Morgan Dollar 1878 – 1921 and the Peace Dollar 1921 – 1935 that were minted from 0.7734 troy ounces of .900 pure silver.

American Silver Eagles have been issued annually since 1986 bearing the iconic Walking Liberty” design by Adolph A. Weinman, that appeared on Walking Liberty Half Dollars from 1916-1947 on the obverse. The reverse design features an heraldic eagle by John Mercanti, the twelfth Chief Engraver at the U.S. Mint. In July 2021, for the 35th anniversary of the series, the U.S. Mint made ten major design changes to the Silver Eagle, including a completely new reverse design created by Emily S. Damstra. The new design is dubbed Type 2 and is mandated by Law to appear until 2046. Emily S. Damstra , one of the leading numismatic artists of our day, sporting forty design credits with the  United States and Royal Canadian Mints. Two of her designs have won Coin of the year COTY awards. The initials ESD Emily S. Damstra appear on the coin type 2 coins alongside MG Michael Gaudioso, who sculpted the coin. 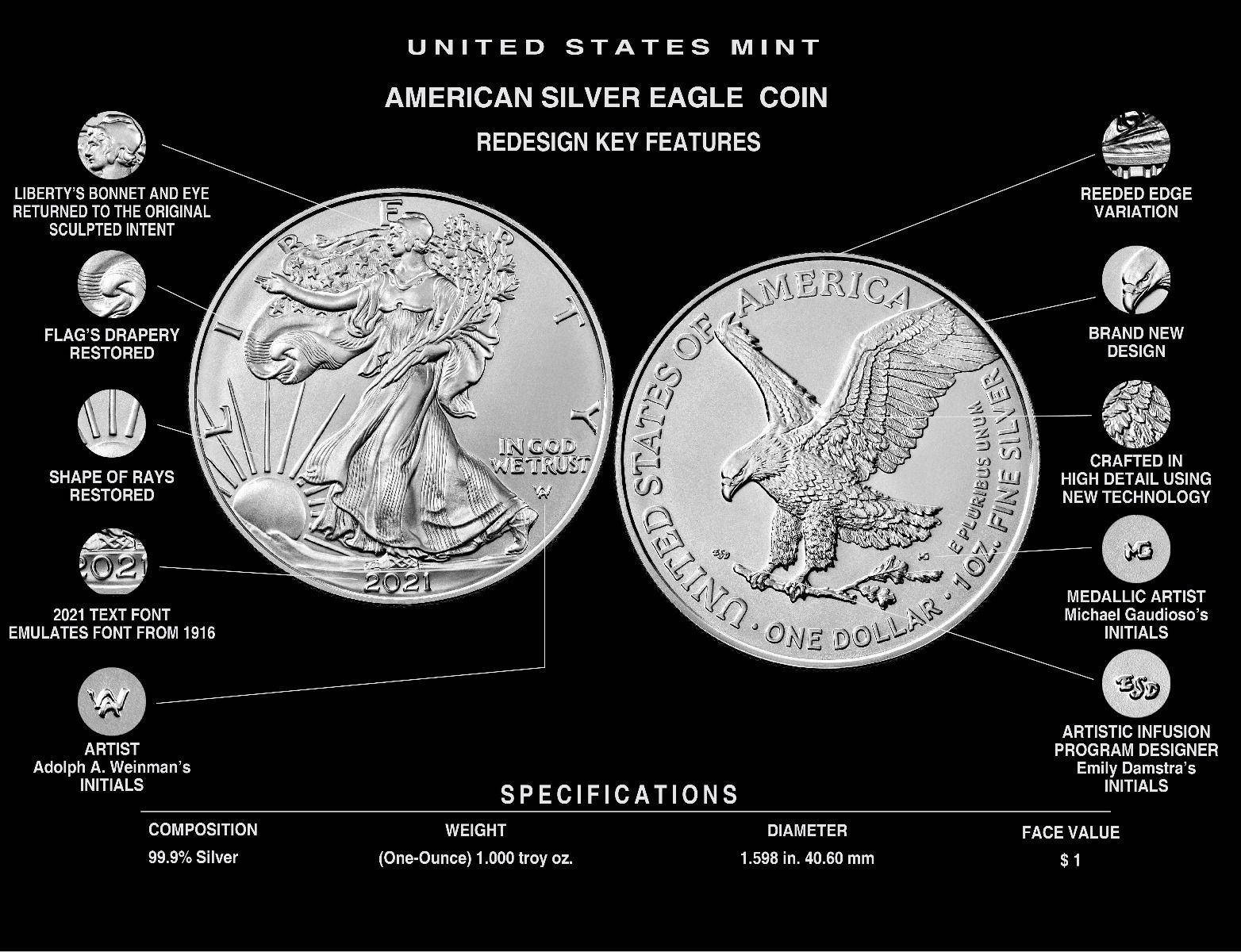 American Silver Eagles are collected by date, condition, mintmark, special finishes and strikes. The bullion coins are purchased for their government guarantee for weight and purity. Proof, Reverse Proof, Burnished, and Enhanced Uncirculated coins are purchased for their condition and rarity and other contributing factors such as First Day of Issue, First Strike, Early Releases, Show Releases and City Releases. The most coveted coins are certified in perfect MS70/PR70 or SP70 condition by the leading coin grading services PCGS, NGC and ANACS.

Collectors can customize their Silver Eagles, enhance the quality of presentation, and add a level of exclusivity and collectability by acquiring certified Signature Series coins. These are coins signed by someone with an interesting personal connection to the Silver Eagle such as John Mercanti, designer of the Type 1 Silver Eagle 1986-2021, Emily S. Damstra, designer of the Type 2 Silver Eagle, Michael Gaudioso, sculptor engraver, Edmund C. Moy, 38th Director of the U.S. Mint or Anna Escobedo Cabral, 42nd Treasurer of the United States.

Type 1 1986-2021  Obverse (heads) features sculptor Adolph A. Weinman’s iconic full-length figure of Liberty in full stride, enveloped in folds of the flag, with her right hand extended and branches of laurel and oak in her left. Inscriptions are “LIBERTY,” “IN GOD WE TRUST,” and “DATE.”

The coin’s reverse (tails) displays former Chief Engraver John Mercanti’s rendition of a heraldic eagle with shield, an olive branch in the right talon and arrows in the left. Inscriptions are “UNITED STATES OF AMERICA” and “1 OZ. FINE SILVER – ONE DOLLAR.”

Type 2 2021 – 2046  The obverse (heads) features a refreshed depiction of Adolph A. Weinman’s full-length figure of Liberty in full stride, enveloped in folds of the flag, with her right hand extended and branches of laurel and oak in her left. For the 2021 coin, the United States Mint returned to its original historical assets to render a closer reflection of Weinman’s original vision that includes the addition of his traditional artist mark (AW). Inscriptions are “LIBERTY,” “IN GOD WE TRUST,” and “DATE.”

The new reverse (tails) design features an eagle as it approaches a landing, carrying an oak branch, as if to add it to a nest. Inscriptions are "UNITED STATES OF AMERICA," "E PLURIBUS UNUM," "1 OZ. FINE SILVER," and "ONE DOLLAR."

None commemorative bullion issue coin are minted at the WestPoint Mint and San Francisco Mint and are issued without a mintmark. In the case where a bullion coin has been certified by PCGS, NGC or ANACS in the popular collector grades of 69 and 70, the reference to the Mint of origin is shown in parenthesis (W) or (S).

Key dates refer to coins in a series that are particularly noteworthy. Factors that contribute to making a coin a key date or semi-key date is being the first and last coins issued in a series, dates that have the lowest mintages, coins with a special date and mintmark combinations, coins with special strikes, finishes, or treatments, and commemorative issues.

In addition to the special issues the U.S. Mint has had to call the San Francisco and Philadelphia Mints to produce supplemental coins to meet high production demand or because of the Covid 19 pandemic. These coins are knows as Emergency Strike, Emergency Issue, Emergency Production and Supplemental strikes. These coins have lower mintages and are popular with collectors. The most valuable being the 2015 Philadelphia (P) that had a mintage of only 79,640 coins.

The record price paid at public auction for a Silver Eagle was $86,654.70 in March 31 2013 to acquire a 1995 W certified in PR70 DCAM  condition by PCGS. The 1995 W Silver Eagle was released as part of a five –piece set that also included four American Gold Eagles. The mintage of only 30,125 was the lowest in the series until the issuance of the Enhanced Reverse Proof coin at the San Francisco Mint in 2019.