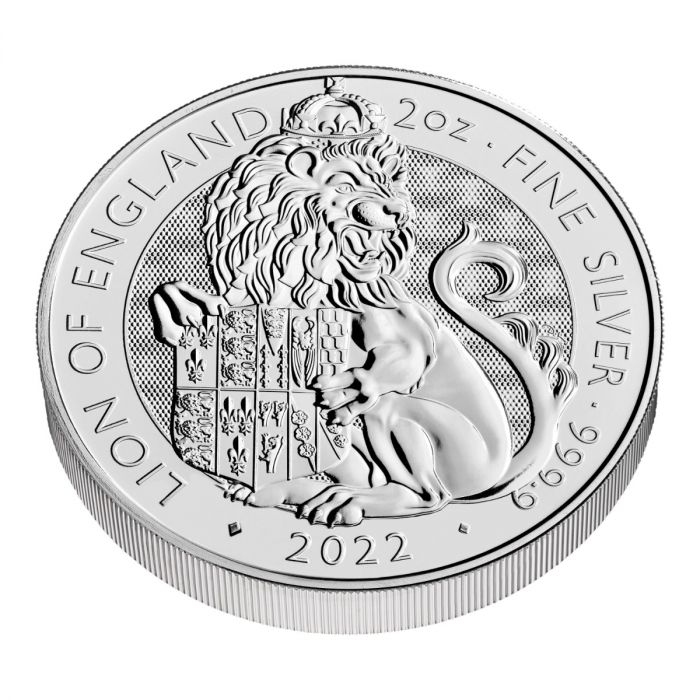 The Lion of England is the first coin released in the new ten coin “Tudor Beasts” bullion series by the British Royal Mint. The series will comprise ten coins each minted in two troy-ounces of .9999 pure silver. Each exquisitely sculpted coin features mythical and ancestral beasts from the Tudor Dynasty, 1485 to 1603. The images are taken from the statues at Hampton Court Palace in the London Borough of Richmond upon Thames chosen by King Henry VIII to line the approach of the Great Gatehouse over the Moat Bridge of his favorite home. With two designs released each year until completion in 2026

Designed by David Lawrence, the motif on the reverse recreates one of the first beasts to flank the parapets of the Moat Bridge. The stone statue of the Lion of England is depicted holding a shield bearing a combination of two coats of arms of Henry VIII and his third wife, Jane Seymour, symbolizing the strength of the couple’s union. The text above the primary design reads LION OF ENGLAND with the bullion versions also including the metal, weight, and fineness. Below is the year of release, 2022. The obverse side depicts the fifth effigy of Her Majesty Queen Elizabeth II, designed by Jody Clark and in use of all British commemorative and circulation-type coins since 2015. The coins’ denomination is included as part of the legend surrounding the Queen’s likeness.