Unknown to most coin dealers and the public, the U.S. Mint set aside a small number of the final Type 1 Silver Eagle coins they minted in 2021 and paired them with an even smaller number of the new Type 2 Silver Eagles to create these incredible sets. 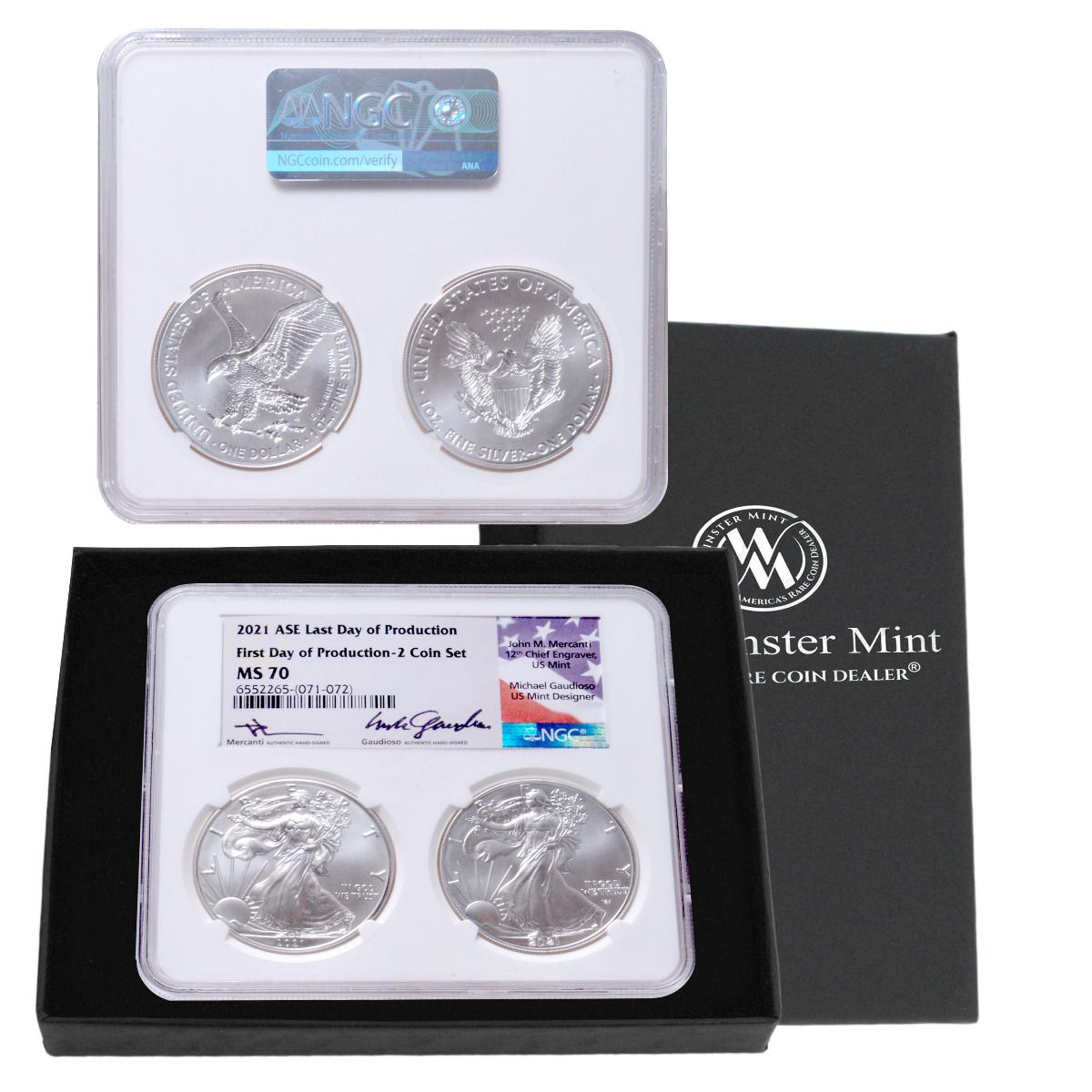 From over 560 million Silver Eagle coins produced since 1986, the Mint held back the final 200,000 coins they minted bearing the iconic heraldic eagle design by John Mercanti. These final 200,000 coins were sealed and strapped at the West Point Mint in 400 boxes each containing 500 coins. The coins in these final specially numbered boxes are the only coins eligible for Last Day of production certification. It’s important to understand that not every coin eligible Last Day of Production can be certified in the highest numismatic grade of perfect MS70 by NGC. Making these finest known MS70 coins even more desirable.

The U.S. Mint at West Point also set aside the first 200,000 coins of the 13,968,500 they minted in 2021 bearing the new Type 2 Eagle landing design by Emily S. Damstra. Here comes the best bit. Only 19,000 coins from the historic first 200,000 Type 2 Silver Eagles are eligible for First Day of Issue certification. This is a tiny number lower than any other key date Silver Eagle including the legendary 1995 W (30,125) and 2019 S Enhanced Reverse (29,909). Not every coin of the 19,000 eligible for First day of production certification has the high-quality flawless strike for them to be certified MS70.

To ensure their integrity as a set for future generations of collectors, we had these coins certified by NGC and had them set in these two-coin holders. This is a permanent record attesting that both coins are Last and First Day of production. In our opinion, no modern issue-certified coin is worth collecting without a top hand signature. These two coin sets have two signatures, two signatures is always better than one!

John M. Mercanti, was the 12th Chief Engraver of the US Mint, and the designer of the iconic heraldic eagle that appeared on every Type 1 American Silver Eagle issued since 1986. His initials JM are engraved on the coin as a permanent record of his association with this coin. John Mercanti has over 100 design credits at the U.S. Mint, more than any other employee in the history of the U.S Mint.

Michael Gaudioso is a coin designer and engraver with 40 credits at the U.S. Mint. He is the engraver of the new 2021 Type 2 American Silver Eagle. His initials MG are engraved on the coin as a permanent record of his association with the new type 2 coin that is mandated to be issued through 2045.

This set records for the once in 35 years' transition from the T1 to T2 design
From over 560 million T1 Silver Eagles these are the final 200,000 coins
From the first 13,968,500 T2 coins only 19,000 are eligible for First Day of production certification
Special Last day & First Day of production certification labels
Flawless MS70 condition
Special two-piece NGC holder
Mercanti/Gaudioso signatures
Initials JM engraved on the coin
Initials MG engraved on the coin